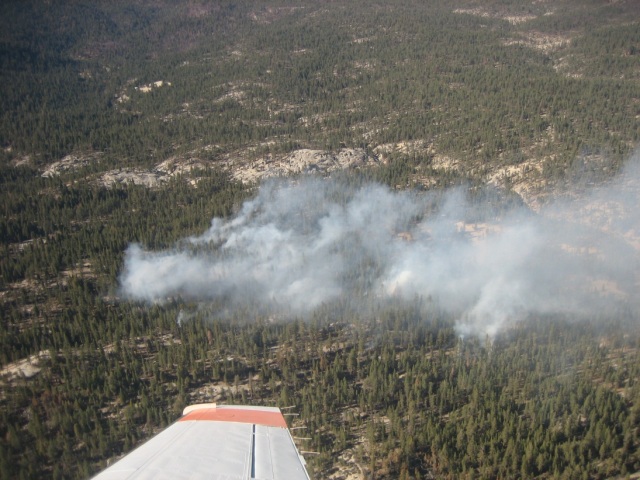 Aerial photo of Soda Fire (above), fire is spreading towards the drainages to the north (top) and east (right) of the photo. Surface and ground fuels have already been burned along the west (left) and south (bottom) of the photo.

The Soda Fire, burning in the Golden Trout Wilderness in Sequoia National Forest, continued its spread towards the north and east despite rain and snow that fell earlier this month. Since the last reconnaissance flight in late February, the Soda Fire has slowly spread through an additional 300 acres. There is an estimated 100 acres remaining for it to burn until it reaches the granite covered slopes of Mountaineer Creek and the Little Kern River.

A reconnaissance flight this week observed an estimated 30 acres still burning through surface and ground fuels. The fire has already burned through the south and west of the current fire perimeter with scattered pockets of smoldering fuels still emitting smoke. The Soda Fire will continue to be monitored by air. Nearby communities should expect to smell smoke from the Fire. Smoke from wildfires can pose health concerns for the public. Residents are encouraged to visit the “Protect Yourself from Smoke” website for smoke protection information at www.cdc.gov/Features/Wildfires/