User rhyang from the High Sierra Topix did a 2 night/3 day trip into the Golden Trout Wilderness on the Inyo National Forest side. The trip resembles the Groundhog Meadow Loop for about half the time. Rhyang starts from Horseshoe Meadow, hikes over Trail Pass, heads west to South Fork of the Kern, checks out Golden Trout Creek, turns north to Big Whitney Meadow, climbs over Cottonwood Pass, and finishes the loop back at Horseshoe Meadow. All photos belong to rhyang. Here is the report.

In the morning I headed down to Lone Pine and Horseshoe Meadow, and started hiking from the Cottonwood Pass TH. I saw fish in the first creeklet I came to on the way to Trail Pass. 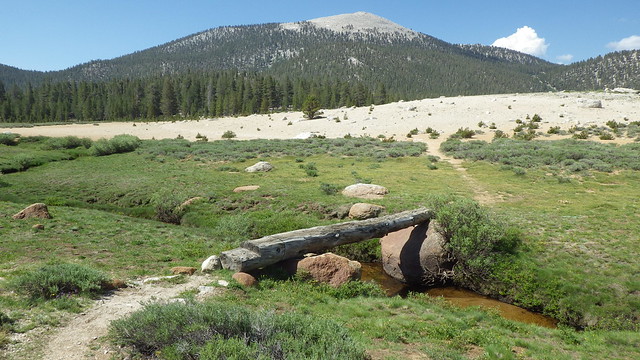 I was feeling sluggish and weak, but soon enough I was at the crest and was rewarded with some nice views on the descent to Mulkey / Bullfrog Meadows. 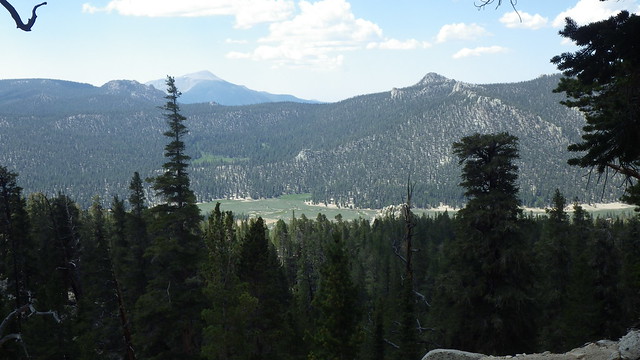 Clouds were starting to build as I hoofed it through the meadows. 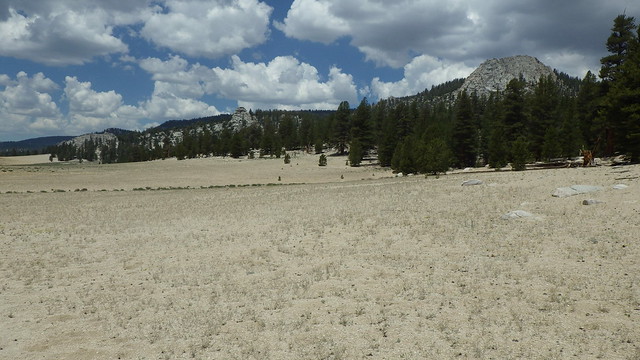 I crossed a small creek, which amazingly held some fish. (Note large cloud in background) 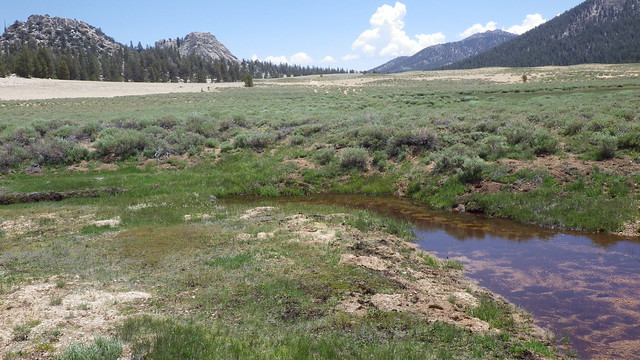 The last time I’d been here in 2003 I was hiking the other direction, so the difference in perspective was interesting. Soon I re-entered the forest and came to a cattle gate, then started up and over a rise. I felt very occasional droplets. It was overcast by the time I descended to the South Fork of the Kern. 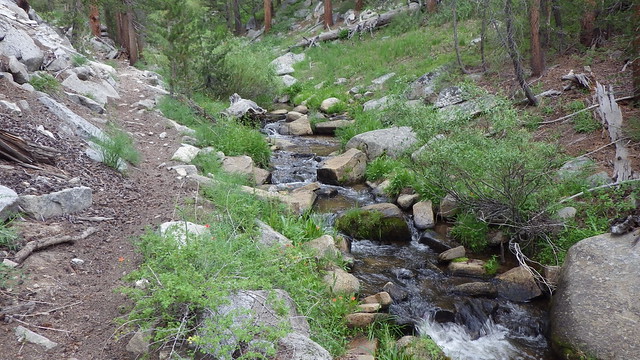 After heading downhill for a while I decided I could wait no longer and started fishing with my ‘short’ tenkara rod; a TUSA Rhodo, ~8-10′ zoom, made for brushy streams and tight cover, such as might be found back east on native brookie streams. The small fish here were eager and colorful; I fished with a new fly to me, the Renegade, which proved deadly the entire trip.

Soon I could hear booms of thunder. Yes, as we all know it is not very wise to hold a long carbon rod in the air during an electrical storm

Nevertheless I continued catching fish for a while, and then decided to pack up and go. Not long afterwards the hail started, and then light rain. I hustled down the trail and made it to the woods just east of Tunnel Meadow and hurriedly pitched my shelter in a fairly large established camp area across the creek. The rain increased in intensity and I decided to take a nap.

By 4:30 it was all over and the sun peeked out from behind the clouds. I looked at the creek and noticed it was running higher and a muddy. Not much fishing to be done this evening. Still, I explored up and down the creek and looked for spots to fish the next morning.

In the morning the creek had cleared, so I spent an hour or two fishing. There were an assortment of pools downstream and I practiced my tenkara casting with a light level line, though often just dapping was all that was needed. The goldens were beautiful and eager little fish. All too soon I had to go. 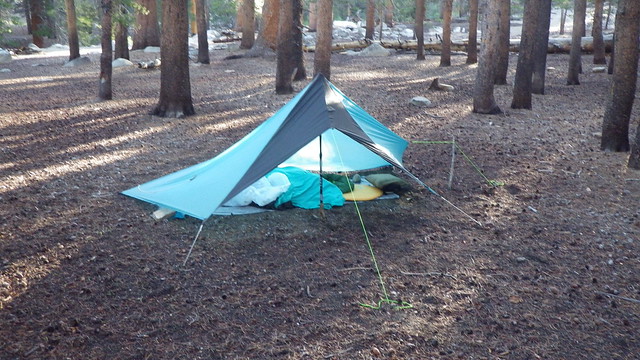 It warmed quickly as I made my way west across Tunnel Meadow. 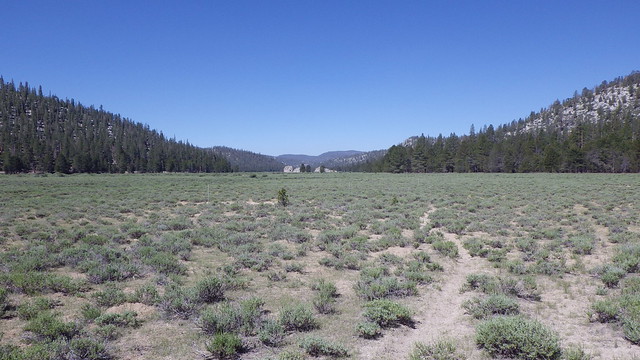 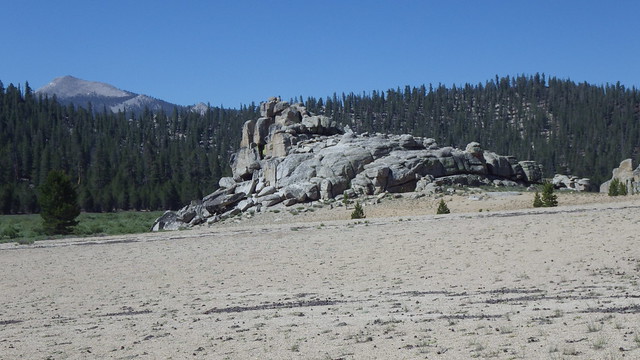 Near the junction and Tunnel station I stopped and descended to the South Fork Kern again, and couldn’t resist fishing for an hour or two. 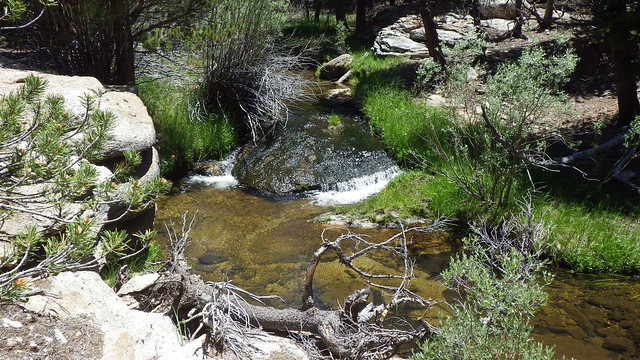 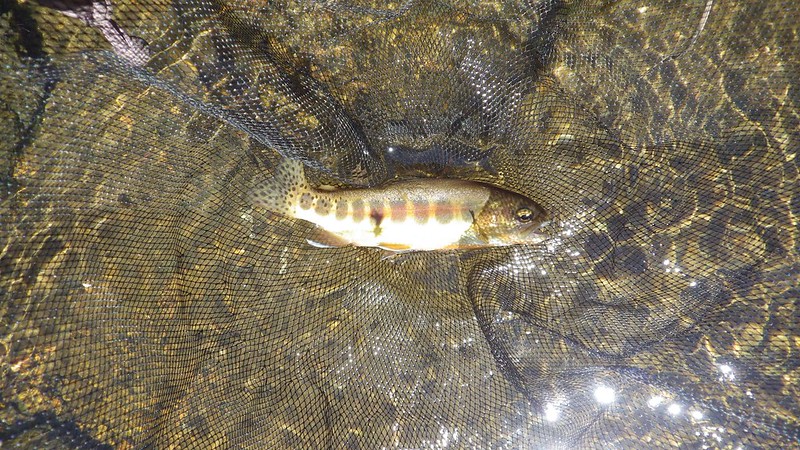 I explored pools, runs, riffles .. stealthily working my way downstream, then approaching back upstream to avoid spooking the fish. I love creek fishing.

It was now afternoon and felt warm, perhaps high 70’s or low 80’s. I only made it another half mile before I could hear the sound of Golden Trout Creek. I decided to go explore that too. It was wide enough that I could step out onto rocks in the middle and cast with the short glass 4wt fly rod I’d brought (6’6″ CGR). 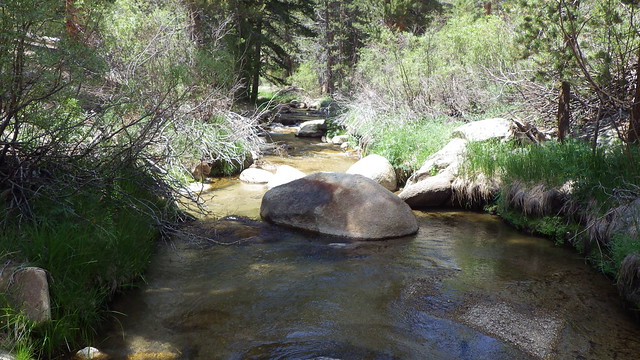 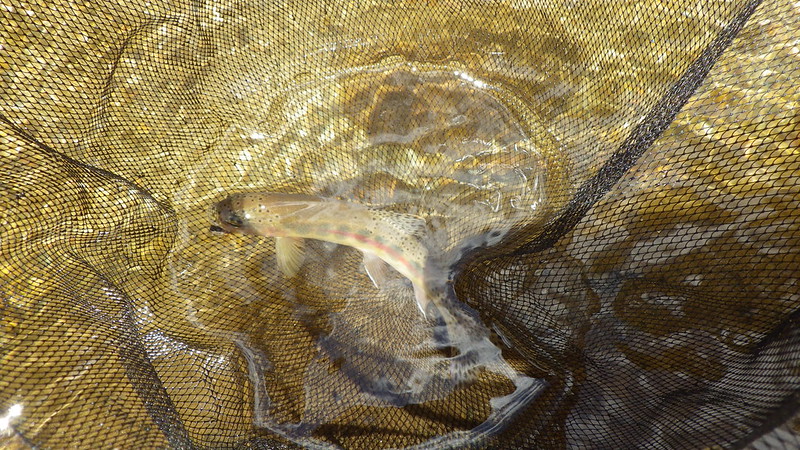 I was in absolute heaven. I decided to camp a discreet distance from the creek on a flat spot, and spent the afternoon fishing up and down the creek. 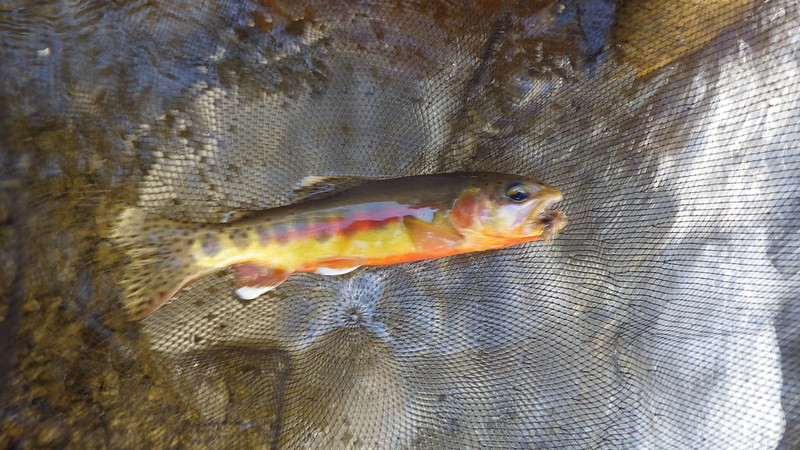 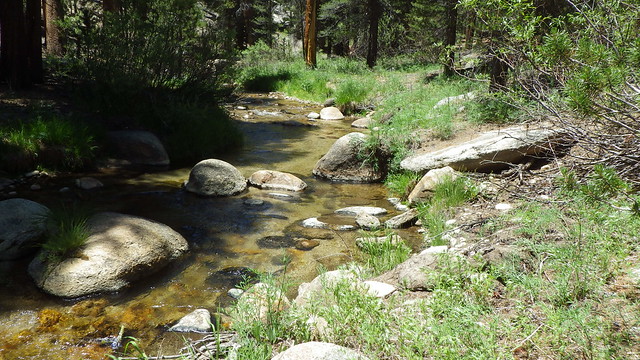 Around 5pm I decided it was time for a nap. In the evening after dinner I just walked up and down the creek listening to its peaceful music, admiring the trout in their ancestral home.

Next morning I started up the trail towards Big Whitney Meadow (after an hour of fishing of course), which conveniently parallels Golden Trout Creek the whole way. It was super tempting to stop, but if I stopped everywhere I wanted to stop and explore I would have run out of food and you’d find my bones attached to my fishing rod

That said, I made it a mile and a half before spying a nice pool full of goldens, surrounded on three sides by brush and fallen timber. I crossed upstream, then worked my way down the opposite bank and found a place to cast upstream into the pool with my Rhodo. 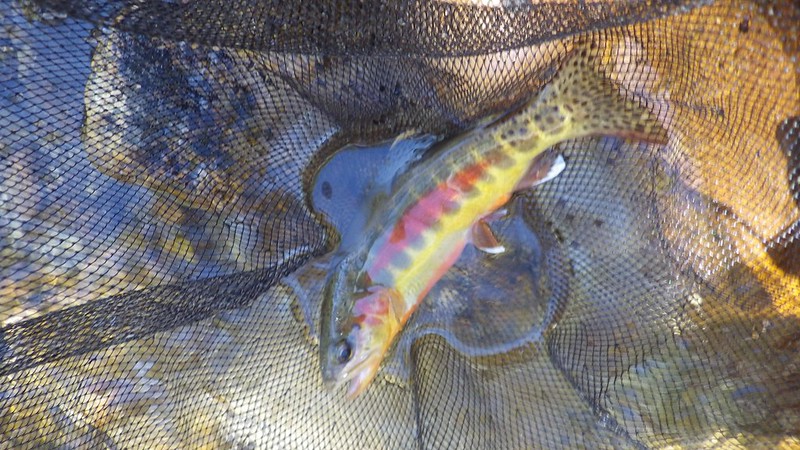 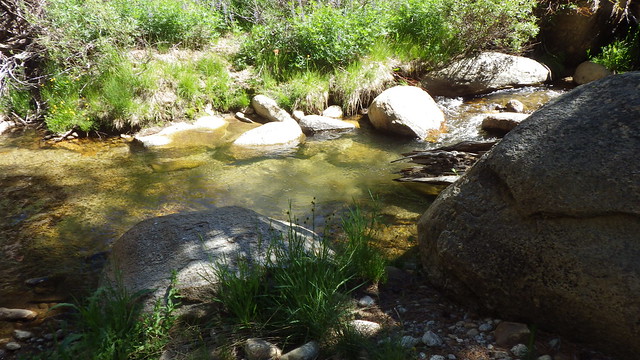 Good times. Continuing up the trail I passed lots of other pools and tempting places to explore. 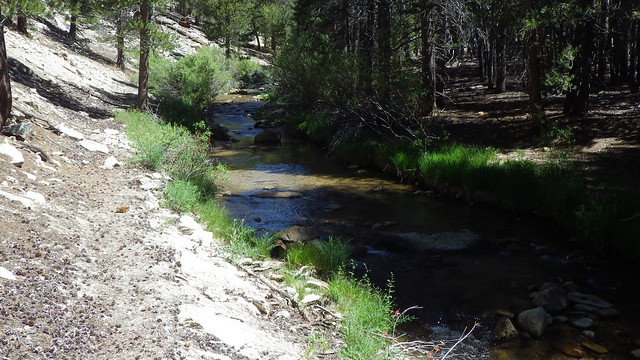 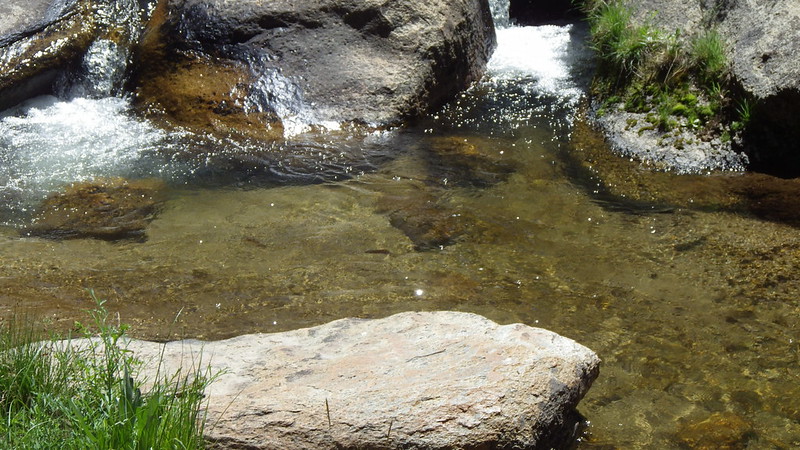 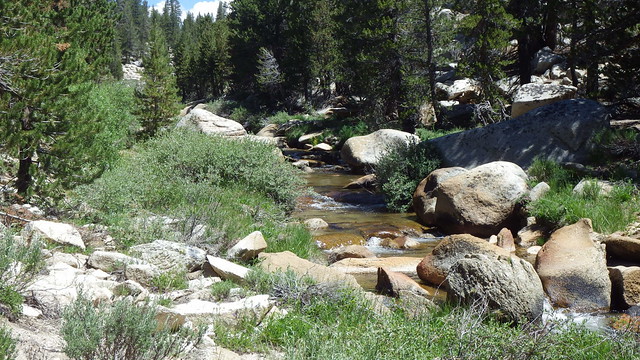 Gradually the terrain was changing in character as I gained altitude. Soon I could see the meadow and the mountains beyond. 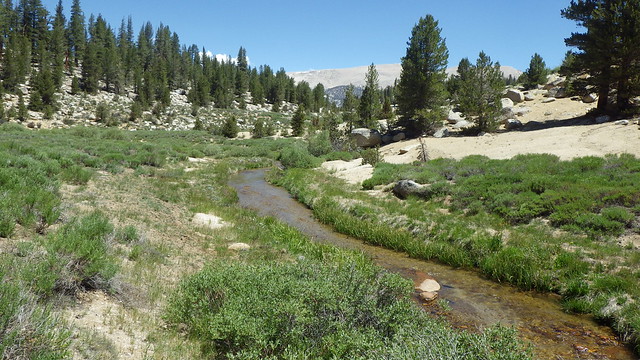 One thing I like about fishing is that it often forces me to slow down and enjoy the hike. I’ve always been a fast walker and hiker, just how it is.

Around noon I stopped for a snack just before entering Big Whitney Meadow, and admired the view. 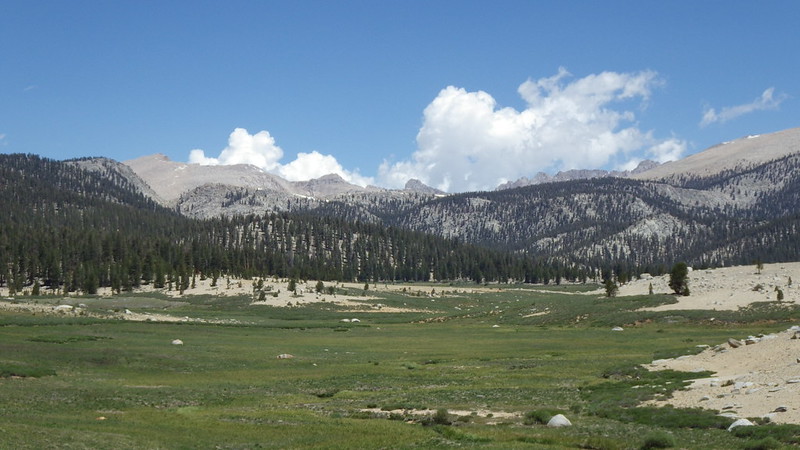 The clouds looked benign, and because of the southwest flow there was no chance of t-storms, so I backtracked about a half mile with my tenkara gear and spent the next several hours fishing, from run to run, pool to pool. With all the hoppers buzzing I decided to try some terrestrials. They definitely worked, but they had to be on the small side — a #10 hopper was too much of a mouthful for the even the largest of these fish, pretty as they were. It was breezy, but the direction was generally upstream, so not a problem

It was one of those beautiful afternoons where you have nothing on your mind but the fish and water and sunshine and blue sky. Be the ball, Danny

I managed to pull myself away when I ran low on water and snacks, made it back to my pack and continued up through Big Whitney. It was windy and seemed largely dry, so no issues with mosquitoes thankfully.

I crossed a small creek (yes with fish), then headed up to a rise which seemed to be a popular place to camp. My timing was inadvertently good, since it looked like it had been recently used (coals in the fire pit sizzled when I poured dishwashing water on them). The evening alpenglow was nice off Cirque Peak. 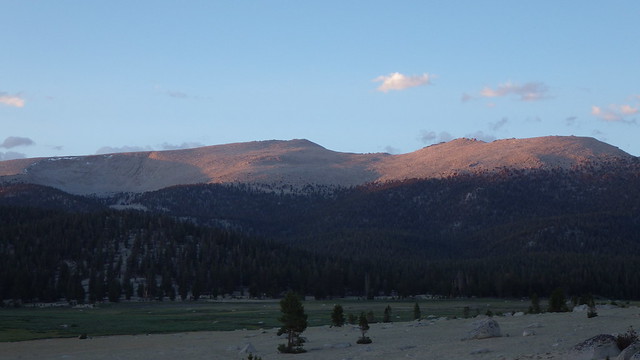 The evening in Big Whitney Meadow was calm and chilly, and I saw no mosquitoes; there was actually frost in places. By 8am I was back on the trail and made it to Cottonwood Pass before 10am. A trail crew was out, and I thanked them for their efforts. 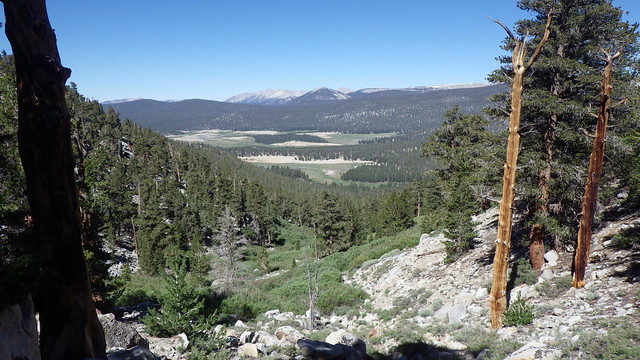 On the way back to Horseshoe Meadow I saw a steady stream of hikers and a couple of horses. 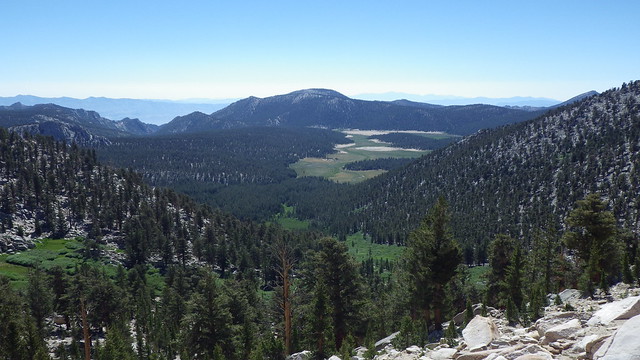 Some folks looked like they were headed to Chicken Spring Lake, spinning rods clearly visible, others looked like PCT hikers and others were just out for a Sunday stroll. It was a nice morning and I made it back to the car by 11:30.

I saw very few mosquitoes, partly because being so far south and lower elevation the area has had more time to dry out, and partly because of breezy conditions. Creek crossings were also not an issue, and I mostly used my sandals as pillow padding

Thanks rhyang for sharing your trip report. Great photos and details should help many other users of the website plan their trips into the Golden Trout Wilderness.