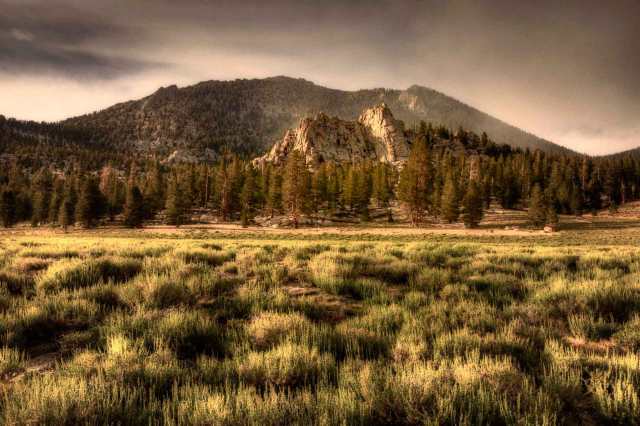 The Southern Meadows Loop takes users to the southern half of the Inyo National Forest’s side of the Golden Trout Wilderness. Round trip is approximately 39 miles and is estimated to take 5 days to complete. One could make it a longer 7+ day trip by camping at the major meadows along the way. Users will trek along ridges, contour along meadows, see the Wild and Scenic South Fork of the Kern River, check out an old volcano, and walk along a portion of the Pacific Crest Trail. Curious as to what meadows you’ll cross through? They are Horseshoe Meadow, Round Meadow, Mulkey Meadows, Bullfrog Meadow, Tunnel Meadow, Ramshaw Meadows, Templeton Meadows, Flat Cow Meadow, Strawberry Meadows, Gomez Meadow, Big Dry Meadow, and Ash Meadow. There will be plenty of smaller meadows in the distance and from view points too.

CAUTION, this trip may require some detouring as meadows in higher elevations can be dryer and without water during portions of the summer season. There will be other possible places to get water/camp in the text below. However, it is ultimately up to the users to plan accordingly.

Begin by taking the trail towards Cottonwood Pass from the parking lot at Horseshoe Meadow. About a half a mile in a trail branches off to the left/south and out into Horseshoe Meadow. Take this trail towards Trail Pass. The trail will continue south for another 1.5 miles. Round Valley will be on your left as you climb up to the Pass.

Once at Trail Pass continue heading south and now downhill towards Mulkey Meadows. You will hike for about 2.2 miles till you are down on the northern edge of Mulkey Meadows. Continue heading west towards Bullfrog and Tunnel Meadows. After hiking about two miles you will begin a small descent into the South Fork of the Kern River. Continue down the Wild and Scenic River to Tunnel Meadow campground, just 3 miles down river, to conclude day one.

The trail continues in a southwest direction following Tunnel Meadow. In about half a mile there is a trail junction. Stay to the left paralleling Tunnel Meadow. About a mile later another trail joins in from the right (north). Continue proceeding straight ahead (south to southwest). The trail passes by the historical Tunnel Meadow Water Tank soon after the junction. Another trail junction occurs within a few hundred yards. Continue following the South Fork of the Kern River towards Ramshaw Meadows and Templeton Meadows. The trail will begin to head in a east-southeast direction.

Red Hill is approximately 1 mile down Ramshaw Meadows on your right. The hill is an old cinder cone volcano. Continue heading east paralleling Ramshaw Meadows and the river. A trail will join in from the south out of Kern Peak Stringer. Continue east and enjoy the views for another 2 miles where the trail will head in a more southern direction, leaving Ramshaw Meadows. A small climb uphill goes over a pass and then a nice drop into Templeton Meadows.

Templeton Meadows has a large cinder cone volcano called Templeton Mountain. As you descend down the small pass the mountain should be easily seen. A trail junction will occur approximately 1/3 of a mile down from the pass. Stay to the left and continue for about another mile as another trail on your left (from the north) junctions in as well as to your right (south). Continue heading straight with Templeton Mountain in view and on the leftside of the trail. Sometimes livestock use can create confusion in this meadow, so an easy way to is make sure you are on the right trail is to have Templeton Mountain in view and you are approaching the western side of the mountain (see map). Another trail will junction in from the west about 1.25 miles later.

Once passed the trail junction, the trail will leave Templeton Meadows and descend along Strawberry Creek and into the southern portion of Flat Cow Meadow. A small trail junction from the south will occur approximately 0.4 miles later from the last trail junction. Continue left, east, and you’ll arrive at Strawberry Meadows about 1.5 miles later. Set up camp anywhere you like. If you press on for another 0.25 miles you will be near the South Fork of the Kern River, which may be an optimal spot due to water supply.

Cross the South Fork of the Kern River and proceed to the north. Note: aerial photos do not show a trail, but the USFS trail maps show a trail does exist. You may have to do some cross-country work for this shorter day as a result. Continue north, paralleling the South Fork of the Kern River for about 0.5 miles. A creek confluences with the river from the east. Do not cross, but instead follow the creek to the east towards Gomez Meadow. The trail stays on the southern side of the creek and parallels it for approximately 3 miles.

Once at Gomez Meadow you will also now be on the Pacific Crest Trail (PCT), which should be well-defined. Take a left, heading in a northern direction, along the PCT for another mile to Big Dry Meadow. You’ll need to leave the PCT to set up camp, just west of the trail. If Big Dry Meadow contains now water, proceed further up the PCT to Death Canyon/Dry Creek. Another option is to back track a bit to Gomez Meadow for a water source.

Start by getting back to the Pacific Crest Trail (PCT) and heading to the left (north). In about 0.5 miles you’ll cross through Death Canyon and Dry Creek. Here is the first significant uphill climb to the eastern ridge line of the Sierra Nevada mountains.

The eastern ridge line is approximately 3 miles uphill. Once at the top, the trail continues to trekking north providing views to the east and west. Owens Lake bed is to the east. Continue on for another 4.5 miles to Ash Meadow. Sharknose Ridge will be to the left (west) of the meadow. This concludes Day 4. If there isn’t any water, head west-northwest, down to Bear Meadow for a potential water source. If Bear Meadow does not have water, head back to the PCT and proceed north to Diaz Creek.

The last day begins again on the Pacific Crest Trail. Remain on the PCT for another 5 miles to Mulkey Pass. During this 5 mile stretch you’ll pass between the headwaters of Mulkey Creek, Diaz Creek, and skim Dutch Meadow (east of the PCT). From the Pass take a right, going north, for another 2.1 miles to the beginning of this trip. You’ll walk on the eastern part of Round Valley and Horseshoe Meadow. Cut across Horseshoe Meadow and then head west, left, once at the road back to your vehicle.